Location:  On the Northern end of Port Townsend, WA, on the Straits of Juan de Fuca.
Dates:  Nov 2012 – Jan 2013
Duties:  Brenda and I were responsible for opening, operating, and closing the museum, which included sales in the small gift shop.
Hours:  Three on/three off, 5 1/2 hours a day.  More on this later. 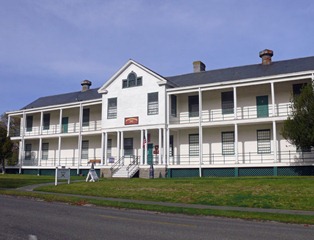 We were disappointed in our stay here, but not to the point where we considered leaving.  The museum Director/Curator is a memorable individual; dedicated to the museum and probably the leading expert in the history of coast defense artillery, not just here, but worldwide.  If it wasn’t for him, we probably would have left early due to the many disappointments we experienced.
The number of hours and days required were an issue among the volunteers throughout our stay.  We were familiar with Washington State’s requirement of 28 hours/week for an RV site, and agreed before arriving to a five on/two off schedule, knowing that the state didn’t require both of us to work the 28 hours, but on arrival were told by the volunteer coordinator that both of us were required to work, and that the state required a five-day a week schedule.  Fortunately, the director allowed the volunteers to work out their own 3 and 3 schedule, with the provision that we kept the 5/2 schedule posted, logged those hours on our monthly worksheet, and told any state employee that we were working the 5/2 schedule.  We were continually told that the 5/2, 28 hours/wk was a “state law”, but since we were actually working a 3/3, put up with the nonsense.  As an aside, I wrote the state volunteer coordinator with what we had been told.  Her reply – “everything you have been told is incorrect”.  I guess what bothered us was not knowing whether the director and volunteer coordinator were simply misguided or that they were trying to badger us into more hours.
The working conditions were miserable.  The museum, housed in a 1900-era building, had no heat in the area where the hosts worked except for small space heaters.  The lack of insulation and the wet, cold weather made for many miserable days, and on most days, no more than two or four visitors would visit the museum.
The RV sites were the crowning blow to our not being able to recommend this location to fellow volunteers.  The sites were grass, a bit of gravel, muddy, and were sloped to the point where after an hour and a half of maneuvering, we finally were able to reasonably level, with the front wheels blocked up to where the entry step was over a foot off the ground.  Getting into the sites involved backing up and in from a small street, over a number of pot holes, one of which ripped off a rear-wheel mudflap.
Port Townsend would be an interesting place to visit in the summer when there are festivals and other events.  There was a lot of emphasis to “buy local”, but it’s largely a tourist town of galleries and gift shops, and the local grocery and hardware stores were very expensive.
We don’t regret our stay here since we used the location to explore the Puget Sound and Hood Canal areas, but would not recommend volunteering here during the winter.  On the other hand, the visitor center and campground hosts fall directly under the state, have better RV sites, and a much more reasonable work schedule.
Posted by DNPC at 2:54 PM No comments: 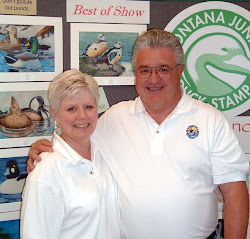 DNPC
I spent 30 years as an active-duty Air Force air traffic controller, and another eight as a Department of Defense (DoD) civilian.